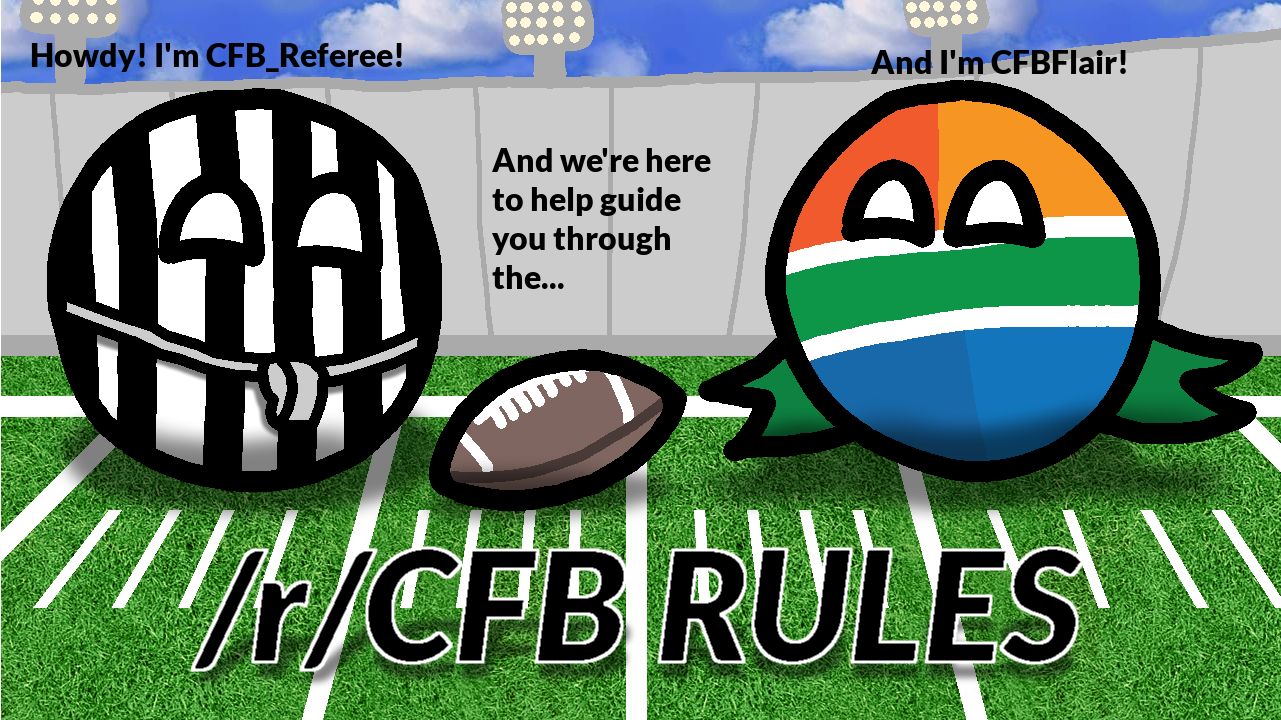 1. Be a positive contributor

Posting content that deceives or harms others is prohibited, as is other user behavior that is destructive to the community, including but not limited to misinformation, ban evasion and other destructive behavior. Users who act destructively may have their content removed or be outright banned at the moderators' discretion.

2. No personal attacks or harassment

As Reddit’s site-wide content policy states, Remember The Human. Using personal attacks against other users or harassing other users violates this rule.

Examples of personal attacks include but are not limited to behavior such as name-calling, questioning someone’s intelligence, and otherwise treating people in a way you yourself would not want to be treated. Friendly ribbing and trash talk is part of sports fandom, and is fine. This can be a narrow line sometimes, so if you're not sure, tread carefully. Such comments must also not violate any other rules.

Harassment can take many forms, and examples include but are not limited to post-stalking, writing threats, wishing harm on other users.

3. No joking about sexual assault or violence

Only serious discussion is allowed about serious crimes, injuries, and death so jokes and trash talk stemming from these subjects are prohibited. If you're not sure, err on the side of caution. This includes, but is not limited to:

4. No racism, homophobia, sexism, ableism, transphobia, or other bigotry

Using any comment that is demeaning, racist, sexist, homophobic, ableist, transphobic, or bigoted in any way is not allowed. This also applies to jokes about mental and developmental disabilities.

You may not post any personal information of private individuals. That means: no names, addresses, phone numbers, email addresses, Facebook links, or anything else that might identify someone. This applies whether or not you have permission from the person.

Posting the same or similar links, posts, or comments repeatedly in a short time frame may result in a ban.

Posting links to external sites for the primary purpose of generating income is forbidden and may result in an account suspension, ban and/or a domain ban. Instead, we recommend purchasing an ad.

7. No annoying or superfluous bots

If your bot randomly wanders into /r/CFB and is annoying users or not serving a specific purpose, you can expect it to be banned. Don't take it personally - we just prefer to keep the bot fluff to a minimum.

We do make exceptions for certain bots on a case-by-case basis. If you are unsure of whether your bot will be welcomed at /r/CFB, send us a modmail and we will be happy to review.

8. No politics or religion

College football is inherently political. However, avoid any political/religious discussion or threads unless it's directly related to a college football issue that’s being discussed. Such comments must abide by all other /r/CFB Rules.

Do not message the moderators until you have read this in full. Doing so could prolong your ban. In particular before messaging please note:

If a rule is broken with intent, we often start with a suspension. This helps us meet the primary goal of quickly cleaning up posts that break the rules and preventing widespread rule violations.

If your ban is 5 or more days, you can appeal it following these steps. An appeal is a chance to have your ban reconsidered, but is not a guarantee.

1. Find which rule you may have violated by reading the /r/CFB Rules thoroughly

2. Fill out the appeal form here.

3. Wait for a moderator to reply

If you are banned, you have probably broken the /r/CFB Rules (See above). There are three levels of corrective action that we can take:

Which action is applied to you is a function of the severity of the infraction, whether you are a repeat offender. Additionally, on high traffic days (particularly on game days) we tend to be less lenient simply because we lack the bandwidth to be gentle.

A warning comes in the form of a message from /r/CFB, and is generally reserved for rule violations that are inadvertent or borderline. There are no specific penalties from a warning, but do note that if you get one there will be less leniency for future infractions. You are not guaranteed to receive a warning for your first offense, as these are given out under very specific conditions.

Suspensions are temporary bans, and are given out as a corrective measure to curb rule-breaking behavior. Suspensions are often given out as an official warning for blatant rule breaking. Bans disable commenting on or submitting to /r/CFB. If your suspension is under 5 days, it will not be reviewed. Longer suspensions may be reviewed if and only if you follow the instructions on this page. The length of your suspension is proportional to the severity of the infraction. If you are suspended we suggest cooling off and reflect on how you can change your posting habits to avoid running into problems again.

Permanent bans are issued on occasion to flagrant violators who are unlikely to be productive members of the community, generally limited to spammers, trolls, and repeat offenders. If the message you receive does not say it is temporary, then it is permanent. It is rare that we lift a permanent ban, but you may apply for clemency by following the directions below.

Bans are reviewed exclusively in Moderator Mail. We won't discuss bans in private messages, nor publicly on the subreddit. Attempting to discuss your ban in any other place (via PM or by making another account to post on the subreddit) will work against you.

Modmail is not like other types of messages on Reddit, so if you have never had a conversation in modmail before, here are some screenshots to show you what it looks like:

To begin a conversation in modmail, simply respond to the message you were sent informing you that you were banned. If you were not banned and you want to talk to the us anyway, or you cannot find the ban message in your inbox, you can always just message us directly using the "Message the Moderators" link in the sidebar. If you get responses from multiple moderators, it is not necessary to reply to each of them. A response sent to one moderator can be seen by all the moderators.

How Not to React

Pointing toward others' behavior as an excuse

Insulting the Mods, Rules, or Other Users

You said mods don't warn people in threads, so why do I see them warning people sometimes?

When the subreddit is not very busy, or all is quiet on the moderating front, mods will sometimes take the time to explain the warning publicly instead of banning. Public warnings are also given in some instances where moderators feel a more visible reminder of the rules could benefit other people in addition to the user they are directly responding to (as a sort of PSA).

You guys haven't responded to me about my ban. What gives?

We're not so busy that we don't see most modmail that comes in fairly quickly. If you haven't gotten a response for a while, one of these things might be in play:

Shadowbans are a sitewide disciplinary action from Reddit that makes it impossible for others to see your posts. The /r/CFB Mods have no control over this, and your only recourse is messaging the reddit admins.

I read the rules and this policy, but I don't know what I did wrong.

If this is really the case, reply to your ban message and let us know. If you're honestly confused, we'll usually be willing to explain things for you.

Our policy on post approval has evolved over the years, and continues to evolve. In general, we abide by our mission statement: /r/CFB is a welcoming community celebrating fun, camaraderie, and creativity in all of college football.

A much more detailed breakdown of specific edge cases is below. There are special guidelines for Game Threads, Post Game Threads, Recruiting Threads, and Draft Posts in separate tabs at the top.

Feel free to ask us in modmail beforehand if you're not sure whether something would be approved!

Game threads must be requested through the Game Thread Generator available here. The system will automatically post the Post Game Thread on your behalf. Poorly done game threads, particularly if repeated, may result in your being blocked from claiming future games.

Posts about recruits and transferring players must follow the following rules for title and content. Any posts not adhering to these rules are subject to removal.

Posts about players declaring for the Draft must follow the following rules for title and content. Any posts not adhering to these rules are subject to removal.